All About Autonomous Ships 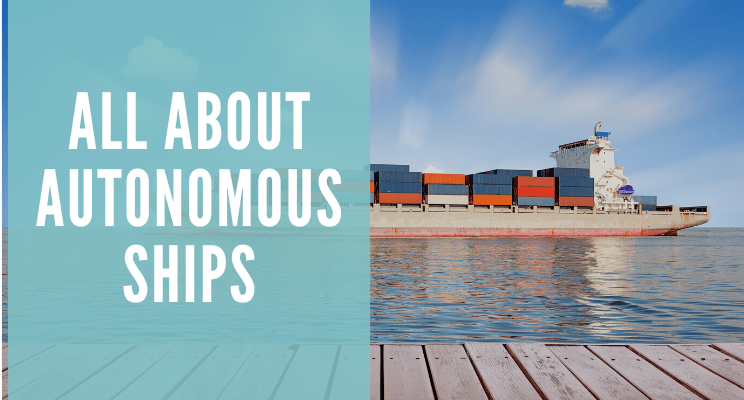 If you’re in the logistics industry, you probably are familiar with automation. It has been used for years in planes via autopilot and is now seeing consistent domestic use in trucking shipments. However, automation isn’t limited to just air and land options. Nowadays, there is a growing interest in the latest innovation in automated technology: autonomous cargo ships. Read on to learn more about this growing technology, and what sets it apart.

So, how did we get here? Unsurprisingly, the renewed interest in autonomous ships is due largely in part to COVID-19, which spurred many other rapid technology developments.

During the beginning of COVID-19, cargo ships became a big concern for many countries. Countries couldn’t just stop importing and exporting goods, but felt as if the crews of cargo ships were raising the risk of COVID transmission for themselves and others and they traveled from port-to-port. Suddenly, the idea of minimally crewed, Maritime Autonomous Surface Ships became highly appealing.

Another factor overall safety in the industry. Tragically, accidents still due happen at sea, which can result in a loss of human life. Having less individuals on ships lowers the potential human cost, as well as the potential human error on ships. The reduction of both may eventually lead to the lowering of insurance rates for autonomous ships.

Finally, we have the push towards more environmentally friendly shipping. This is a hot topic in the logistics world, with many companies implementing new technologies in their domestic shipping in an effort to become more eco-friendly. Others are taking it a step further, experimenting with biofuels at sea. It makes sense then that autonomous ships, with their accident-reducing technology, efficient data-route calculations, and stringent rule following are highly appealing for those looking for more environmentally friendly shipping. The combination of the factors listed above reduces the likelihood of environmentally disastrous spills, shortens route times leading to less emissions, and makes sure emissions are not discharged in restricted or sensitive areas.

What Makes Them Stand Out?

Right now, there are three key factors that autonomous ships are focused on:

It’s no secret that cargo ships are big, so this may have been your first thought as well. If a cargo ship is self-steering in the ocean, what stops it from hitting others?

The answers lie in artificial intelligence. Companies such as Orca AI have been hard at work developing state of the art intelligent navigation systems. These systems can detect objects and other ships, measure the distance from them, and alerts the crew with risk assessment of a possible collision using AI, making autonomous ships safer for everyone.

These algorithms are very important as ultimately, they are the ‘brain’ of the ship. Control algorithms receive data, and then interpret that data following maritime rules and regulations. Given the new nature of autonomous ships, these regulations are still being decided and improved on as more trials occur. However, the future looks promising.

Last, but perhaps most importantly, we have sensors. Sensors are already used in ships, often in the form of a radar. However, autonomous ships will take it one step further.

For these ships, input from multiple sensors is not only possible, but highly preferred. Autonomous ships make use of radars, thermal imaging, HD cameras, and climate indicators, all at once. Additionally, more sensor combinations are being tested by companies each day, leading to even more data that can be used to improve autonomous ship algorithms.

Currently, most autonomous ships are still in the trial phase. Those that are running are still considered to be only around level 2 on the automation scale, which means they still require quite a bit of human guidance (similar to car with cruise control). However, the interest in them is growing steadily, with the goal for a fully autonomous, non-human influenced cargo ship sailing in 2035.

At OASYS, we pride ourselves on being at the forefront of technology knowledge in the logistics industry. If you are interested in learning more about us or our product features, don’t hesitate to contact us today.

If you found this article helpful, share it on social media, and be sure to check our socials for the latest in freight forwarding software news!

This site uses Akismet to reduce spam. Learn how your comment data is processed.